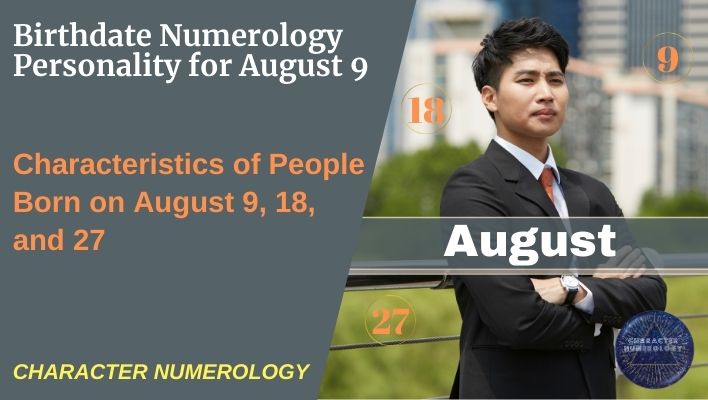 In this Birthdate Numerology Personality for August 9 post, we will be going through the characteristics of people born on August 9th, 18th, and 27th.

You may find this article of value if you have people you know who are born on these dates. These can be your family, relatives, friends, colleagues, or business partners.

It will help you relate better and correlate what the numbers say versus what you know about the people you know.

Or, if you are born on any of these dates, it will be even easier for you to experience what the numerology chart can tell you.

Whichever may be the case, I hope this post will provide some value to you.

Therefore, the result will be number 9 when we reduce the 18 and 27 to single digits.

If you are new to numerology, this may be hard to understand at first, but the subsequent sections should hopefully help to explain further what I mean.

Overview for People Born on 9th, 18th, and 27th August

And the table below shows the grouping of people born on the 9th, 18th, and 27th August across different years by the character root numbers.

In the subsequent sections, we will go through the Character Root Number 9 personality group as an example to learn about their characteristics.

If you are born in other years and would like to have a similar reading analysed for you, do reach out to me.

And this general view can be observed by looking at the numbers in the top left and left outer section of the numerology chart, as shown below.

People born on these August dates will have the 9-8 number pattern appearing on the top left section of the chart.

It is the pairing of the Entrepreneur and the Guardian and is generally about opportunities and responsibility, respectively.

It suggests that they are the type who are dedicated and committed to their career or business. But this is also what brings about unnecessary stress.

They have many expectations, and it feels like they want everything. While they persevere in doing things to achieve success, the results are sometimes not what they expect.

There is a possibility that they may often return to the original position or plan, where everything needs to start over again.

In their interaction with people, they will receive help from many friends or supporters. But at the same time, they will also feel stress from the assistance given.

And as they care about what others say to them, they may feel restricted in choosing freely the kind of lifestyle they truly desire.

People with any birthdates above belong to the Character Root Number 9 (Entrepreneur) personality as their core.

Let’s examine the rest of the numbers that represent the inner character of this chart. These are the numbers located inside the inverted triangle.

And we will then look at the other number meanings in the outer character, which are the numbers located outside the inverted triangle.

The completed chart above shows the core character as the 8-1-9 number pattern and the Character Root Number 9 personality type.

People who are Character Root Number 9 type are observant, intelligent, adventurous, and honest.

And the number 8 symbolises responsibility, while the number 1 represents independence.

Thus, we can expect that they demand a lot on themselves and are hardworking, disciplined, and keeps themselves occupied perpetually.

In essence, the explanation of this number combination is quite similar to the 9-8-8.

Perhaps they should learn to delegate their tasks whenever they can to help balance their life.

But it may be hard to let go of things for these people, as a part of their inner character (1-9-1) suggests that they prefer to handle things themselves.

By working alone, it helps them to get creative or to think strategically. It helps in the ability to produce new or unique ideas or solutions.

The right outer section of the chart shows the 2-1-3 number pattern and, it suggests they can be rather blunt or authoritative when they speak.

They have a strong desire to be in control and push things forward. And while they are action takers, they also have a quick temper.

And on the bottom section of the chart, we see the 1-8-9 number combinations.

We may find that they have a no-nonsense approach, as the inherent energies of this number pairing carry a responsibility element that tends to weigh them down.

The personality traits of both the inner and outer characters in this chart look aligned. We may logically infer a personality type where they are transparent with themselves.

The 2-8 number pairing carries the vibrational energies that help shape the person to be more patient and a good conversationalist.

And the 3-9 number combination on the right outer section of the chart shows that they are generally the type who has the drive and enthusiasm that helps them to find opportunities.

Overall, they have to be mindful not to overstretch themselves too much. Focusing on just a few ventures at a time will help them to reap better returns.

If you would like to keep in touch to learn more about numerology or be updated whenever I release new content, you can find out from either one or all channels below.