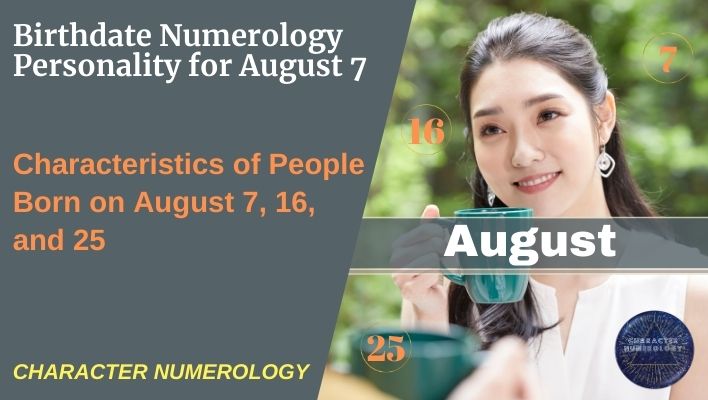 In this Birthdate Numerology Personality for August 7 post, let’s explore and understand the characteristics of people born on August 7th, 16th, and 25th.

Therefore, when we reduce 16 and 25 to its single digit, it will result in the number 7.

Overview for People Born on 7th, 16th, and 25th August

And the table below shows the grouping of people born on the 7th, 16th, and 25th August across different years by the character root numbers.

In the subsequent sections, we will go through the Character Root Number 7 personality group as an example to learn about their characteristics.

If you are born in other years and would like to have a similar reading analysed for you, do reach out to me.

And this general view can be observed by looking at the numbers in the top left and left outer section of the numerology chart, as shown below.

People born on these August dates will have the 7-8 number pattern appearing on the top left section of the chart.

From their youth, they will have many friends or supporters assisting them throughout their lives. But at the same time, they will feel some stress receiving all this help.

And as they care about what others say to them, they may feel restricted in choosing freely the kind of lifestyle they truly desire.

They may not want to disappoint the expectations that their friends or supporters have on them. Or they may want to try and please everyone.

This type of mentality will place a heavy burden on them if they do so.

On the exterior, they often appear to others looking determined, who work hard for their goals or dreams. Once they set their target on something, they will put in their best effort to achieve it.

Success will be theirs as they set great expectations for themselves. And they do not want to disappoint those who have pinned high hopes on them.

They may also have high expectations of those close to them.

People with any birthdates above belong to the Character Root Number 7 (Celebrity) personality as their core.

Let’s examine the rest of the numbers that represent the inner character of this chart. These are the numbers located inside the inverted triangle.

And we will then look at the other number meanings in the outer character, which are the numbers located outside the inverted triangle.

The completed chart above shows the core character as the 6-1-7 number pattern and the Character Root Number 7 personality type.

People who are Character Root Number 7 type enjoy good relationships with others. The number represents personality traits of sociableness, luck, gratitude, and a sense of justice.

The 6-1 number pairing shows that they demand the best quality in everything they have. Having a good fashion sense and dresses up according to the situation is something you may notice about these people.

We may also notice that the environment surrounding them, such as their home, is usually well-decorated.

They are talented people, and they have a preference to work alone to do some strategic thinking and creative work.

They are bold and courageous to bring forth revolutionary changes or works of art.

But the 2-1-3 number pattern on the right outer sections of the chart suggests they can be rather blunt or authoritative when they speak.

They have a strong desire to be in control and push things forward. And while they are action takers, they also have a quick temper.

And on the bottom section of the chart, we see the 8-4-3 number combinations. The vibrational energies of these number pairings infuse the person with a hardworking and meticulous mindset.

They are very analytical and have many ideas in their mind as characterised by a number 4.

But the presence of the number 8 in the front may place a burden on their thought process where it adds on doubts or fears whether what they plan to do will turn out fine.

They may have contradictory thoughts in their minds, and it seems to make them look indecisive and unable to carry out their plans.

It will limit their success and should be one of their lifelong goals to overcome this shortcoming if it does happen.

So these are things that people having this chart should be mindful of about themselves.

The 2-8 number pairing carries the vibrational energies that help shape the person to be more patient and a good conversationalist.

We may find them usually talking enthusiastically, filled with drive, optimism, or passion.

And they should often remind themselves to focus their energies and not overstretch their bandwidth.

If you would like to keep in touch to learn more about numerology from me or be updated whenever I release new content, you can find out from either one or all channels below.