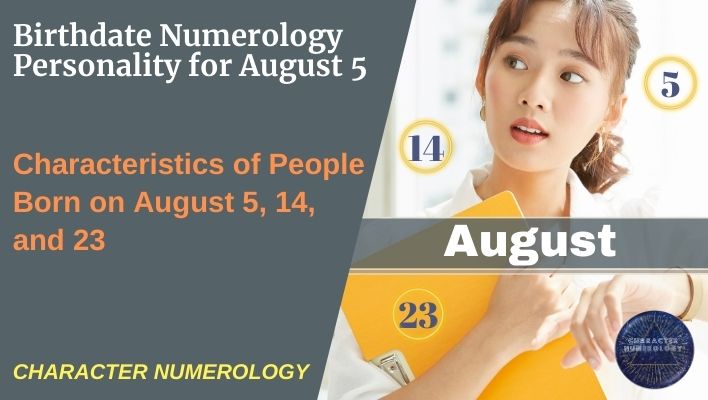 In this Birthdate Numerology Personality for August 5 post, let’s explore and understand the characteristics of people born on August 5th, 14th, and 23rd.

Overview for People Born on 5th, 14th, and 23rd August

And the table below shows the grouping of people born on the 5th, 14th, and 23rd August across different years by the character root numbers.

Another important point to note is that the birthdates above will result in a Master Number 11, as highlighted in red above.

In the western Pythagorean Numerology system, Master Numbers are not reduced further to the single digits. It is because it represents a higher potential than the single-digit numbers.

Nevertheless, I will cover this separately in the future.

And there will be some differences on the right side of the numerology chart from those born before 2000.

In the subsequent sections, we will go through the Character Root Number 2 personality group as an example to learn about their characteristics.

People born on these August dates will have the 5-8 number pattern appearing on the top left section of the chart.

It suggests the pairing of ambition and responsibility, and we will find that they are hardworking, committed, and creative people who work diligently to deliver.

They are always busy as they go about working on their tasks to reach their goals or targets. And the numbers suggest that they may have to work alone to handle the affairs that come to them.

They might feel lost or confused sometimes but will eventually come around it.

And as the 5-8 number combination results in the number 4 (Mastermind), it hints that they are always working towards building a safety net to give themselves a sense of security.

The 3-9 number pattern reflects how they interact with other people or approach life in general. They are enthusiastic and often on the lookout for opportunities.

But their tendency is that they will overstretch themselves across many things at a time. As a consequence, results are not always positive or slow-moving.

Reminding themselves to focus just on a few things at a time will be beneficial for their well-being.

Subtract nine from 1969 consecutively if you want to know the years before this year having the same grouping here.

People with any birthdates above will fall under the Character Root Number 2 (Communicator) personality as their core.

The completed chart above shows the core character as the 4-7-2 number pattern and the Character Root Number 2 personality type.

Folks who have the 4-7-2 number combination have a friendly personality and are well-liked by others. With their planner instincts, they have a great perspective on what people want.

It makes them great consultants, and they often put the interest of others first, which is most likely why people tend to be easily attracted to them to seek their advice.

Both the 5-8 and 1-6 numbers in this chart reflect a characteristic of working alone.

So despite being a Character Root Number 2 that indicates either a communicator or chatterbox, we can infer and be pretty sure that they are the type who works hard too.

The 8-4 in the right outer section suggests that they are hardworking and detailed in their work, and they have many ideas.

However, the presence of the number 8 in the front places a burden on them where it adds doubts or fears whether what they plan to do will turn out fine. They may ponder over polarising thoughts or opinions and become indecisive.

But at the end of the day, they may still do quite well in life, as suggested by the 9-6-6 number pattern at the bottom of the chart.

In essence, the pairing of the numbers 9 and 6 indicates success and wealth or wisdom, respectively.

However, life will not be that smooth sailing as they have to go through many ups and downs to achieve success.

The core difference in the numerology chart for those born after 2000 is on the right sections, as shown above.

If we use the keywords that I have coined to represent each of the numbers, the 2-5-7 number combination will mean Communicator – Conqueror – Celebrity.

People with the 2-5-7 number combination may have a communication style that can be quite authoritative. But for some reason, others will listen and follow.

So when we hook up the 2-5-7 with the 4-7-2 number combinations, we can explain that people having this numerology chart have a friendly personality, speaks firmly and with authority, and commands respect or attracts others to them. They could be great influencers.

And on the right other section of the chart, we see the 9-3 number pattern.

A personality trait that we may observe from this number pattern is that they often search for new opportunities, similar to what we see on the left side of the chart.

They like to do things fast and not drag. Achieving quick wins is most suitable for them, so they should focus on one thing at a time.

No special number pattern exists in these numerology charts.