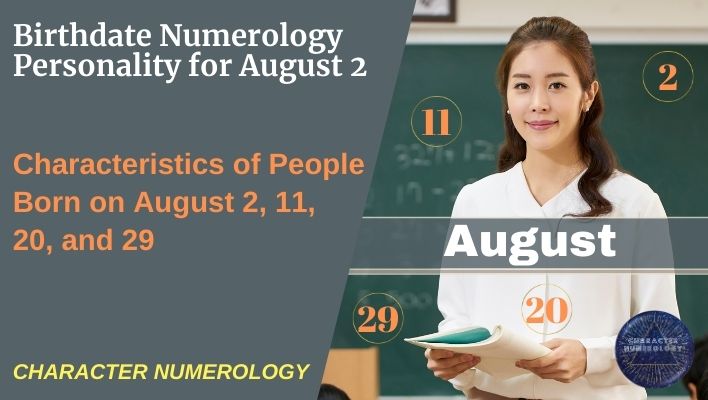 In this Birthdate Numerology Personality for August 2 post, let’s explore and understand the characteristics of people born on August 2nd, 11th, 20th, and 29th.

Coming back then, when we pair any of these four dates in August with different years’ groupings, we will observe that the numerology charts are the same.

And the table below shows the grouping of people born on the 2nd, 11th, 20th, and 29th August across different years by the character root numbers.

A point to note is that the birthdates above will result in a Master Number 11, as highlighted in red above.

In the western Pythagorean Numerology system, Master Numbers are not reduced further to the single digits. It is because it represents a higher potential than the single-digit numbers.

Nevertheless, I will cover this separately in the future.

And there will be some differences on the right side of the numerology chart from those born before 2000.

In the subsequent sections, we will go through the Character Root Number 2 personality group as an example to learn about their characteristics.

People born on these August dates will have the 2-8 number pattern appearing on the top left section of the chart.

They do well in expressing their ideas and are good conversationalists. And as they have the responsibility characteristic, represented by the number 8, they are patient with people to ensure their message gets across.

The willingness to repeat themselves over and over again suggests that they are suitable for work that requires them to talk often.

Hence, sales and marketing, teaching, and public speaking are possible areas of work they can venture into as a career.

With the 2-8 giving rise to a number 1, it hints that they have the potential to lead others. But it will also mean that they will be perpetually busy.

Take note, however, that the 2-8-1 will result in a 9-3. It means that they are usually quick to take action on the opportunities presented to them.

People with any birthdates above belong to the Character Root Number 2 (Communicator) personality as their core.

Let’s examine the meaning of the numbers that represent the inner character of this chart. These are the numbers located inside the inverted triangle.

And we will then look at the number meanings in the outer character, which are the numbers located outside the inverted triangle.

The completed chart above shows the core character as the 1-1-2 number pattern and the Character Root Number 2 personality type.

People who are Character Root Number 2 type are supposedly good at communicating with others. They are eloquent, patient, persuasive, and appears compassionate.

However, they may also be talkative, blunt, and appear indecisive on the negative side.

And we should be conscious that the Character Root Number 2, in this case, is derived from a double number 1.

While the number 1 is referred to as the Leader, having a double number 1 put together suggests a conflict since two leaders will have different opinions.

Therefore, clashes are inevitable. And when we see a double number 1, it can mean that the person has a dual personality and may be indecisive due to conflicting or opposing thoughts.

Hence, while they are Character Root Number 2 personality types, we may find that they can change their minds on what they say rather frequently.

Another characteristic that we can observe from this chart is that they are very independent and do not like to depend on others.

People with the 1-9-1 number pattern prefer to work alone. It helps them to think strategically or creatively so that they can develop unique and unconventional solutions.

The numbers on the outer sections of the chart suggest they can be rather blunt when they speak.

So this is something that people having this chart should be mindful of about themselves.

The 3-3 number pattern at the bottom of the chart suggests that they are enthusiastic or energetic people but can be easily impatient or temperamental.

But the 3-3 will result in the number 6, which indicates wealth. Perhaps to enjoy the positive sides of the number 6, they need to remind themselves to curb their emotions.

And this forms a mirror image that implies a dual personality. So, where we say the 2-8 number pattern is related to being very patient or a good conversationalist, the mirror image could very well mean the reverse.

From both numerology charts, we can observe that the numbers 5 and 7 are missing. And of these two numbers, the number 7 may be more valuable as a gap to fill.

The vibrational energies of the number 7 help to improve relationships. It represents personality traits of sociableness, luck, gratitude, and a sense of justice.

Amethyst crystals can be a suitable external source to enhance the vibrational energies of the number 7.

If you would like to keep in touch to learn more about numerology from me or be updated whenever I release new content, you can find out from either one or all channels below.