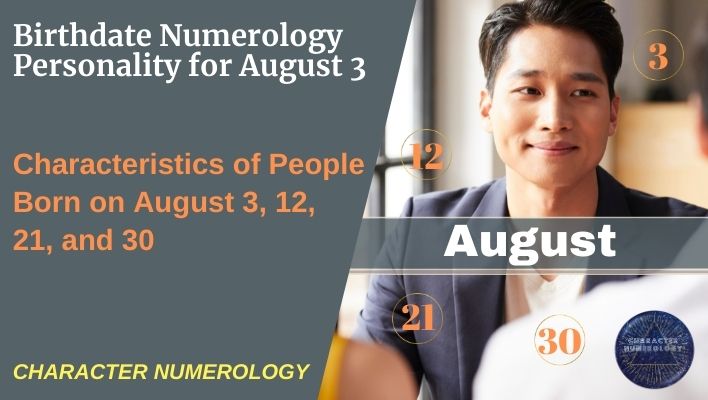 In this Birthdate Numerology Personality for August 3 post, let’s explore and understand the characteristics of people born on August 3rd, 12th, 21st, and 30th.

Coming back then, when we pair any of these four dates in August with different years’ groupings, we will observe that the numerology charts are the same.

And the table below shows the grouping of people born on the 3rd, 12th, 21st, and 30th August across different years by the character root numbers.

However, there will be some differences on the right side of the numerology chart for people born after the year 2000. The specific years compared with the above are in the years 2008, 2017, and 2026.

In the subsequent sections, we will go through the Character Root Number 3 personality group as an example and learn about their characteristics.

People who are born on these dates in August will inherit the vibrational energies that nurture them to be energetic and responsible. It is indicated by the pairing of the numbers 3 and 8, respectively.

Both numbers belong to the fire element, however. So these people might often be feeling busy and stressed. It is in their nature.

The resulting number 2 (Communicator) suggests that they may have a flair for articulating themselves passionately. They can express themselves more powerfully. Or in other instances, they may communicate in a weighty tone.

And when we look at how they engage people or handle things, the 1-5 number pattern on the outer triangle suggests characteristics of determination, discipline, and confidence.

They know what they want and have clear directions on what to do to achieve their goals. And they are the type who will demand a lot on themselves to ensure they succeed.

However, they will also appear to be self-centered and obstinate. But it is because of how people born on these birthdates uphold their principles. They will not easily budge on the decisions they have made.

I know a few people born on these dates personally. And interestingly, they all fit into the above characteristics. Perhaps that is not surprising.

Another interesting observation that I could add is that they all exude a certain charisma that will draw my attention and respect.

People with any of these birthdates will belong to the Character Root Number 3 (Energizer) personality as their core.

The completed chart above shows the core character as the 2-1-3 number pattern and the Character Root Number 3 personality type.

We will find that people belonging to this numerology chart may talk to people in an authoritative tone.

But they can express themselves confidently and possibly rally people together.

On the flip side, however, they might also invite negativity and causing relationships with others to sour.

Regardless of the above, another observation is that they have a strategic mindset. There is a part of themselves that wish to be alone.

Through that, they can exercise their creativity and innovation so that they can come up with unique or unconventional solutions.

New ideas are usually challenging to be accepted by others. Having patience is beneficial, but because this chart is a Character Root Number 3, it is not a virtue they are likely to have.

There is a higher chance of being misunderstood and what people born on these dates may usually do is implementing things by force, albeit in a diplomatic way.

They will always have the means to find a way out and get what they want.

Amethyst gemstone is a suitable choice to augment the vibrational energy of the number 7, which may help improve relationships with people.

The core difference in the numerology chart for those born after 2000 is on the right sections, as shown above.

On the top right section of the chart, we see the 2-8 number pattern. It suggests that people born in such related years are good at expressing themselves and are good conversationalists.

Unlike those born before 2000, having the 2-8 combination may help people born on these birthdates to be more patient. But there will be a tradeoff from what the 1-9-1 number pattern will bring.

Nevertheless, they will be patient with people and strive to ensure that their message gets across.

No special number pattern exists in these numerology charts.