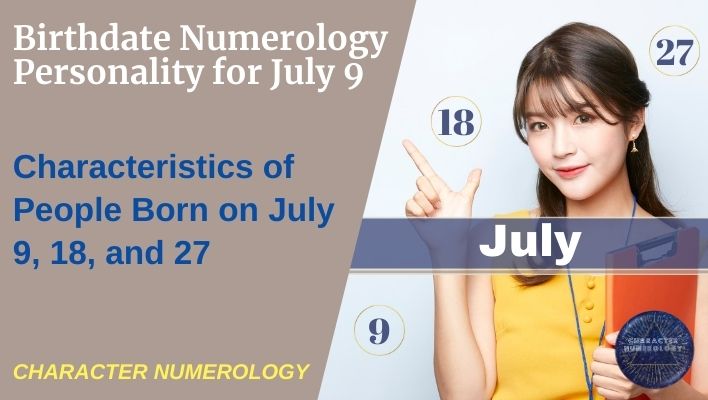 We will be discussing the Birthdate Numerology Personality for July 9 in this post. And this will involve looking at some of the characteristics of people born on the 9th, 18th, and 27th of the month. When we reduce 18 and 27 to its single digit, it will result in the number 9.

It is always helpful to know the personalities of those you are working with or spending time together. If you understand their behavioural or communication style, you can then learn to convey your message optimally.

And ideally, when you understand those people around you better, it helps you appreciate them for who they are. You may then think of ways to learn how best to approach them and avoid conflicts. You will see and feel people through a refreshingly different angle, with numbers!

Through numerology, we can get an insight into people’s characteristics by studying their Numerology charts. What you may find interesting is that people who are born on similar birth dates will likely display similar characteristics or behaviours.

Do you sometimes find that two or more friends or people you know have similar characters? It could well be explained by looking at their numbers, where they may have the same numbers in their charts.

Coming back then, when we pair any of these three dates in July with different years’ groupings, we will observe that the numerology charts are the same. And this is where we can classify them into the nine groups of Character Root Numbers (a.k.a. Life Path).

And the table below shows the grouping of people born on the 9th, 18th, and 27th July across different years by the character root numbers.

The numbers in the numerology chart will be the same when you pair the three birthdays against each column of years above.

However, there will be some differences on the right side of the numerology chart for people born after the year 2000. The specific years compared with the above are in the years 2009, 2018, and 2027.

In the subsequent sections, we will go through the Character Root Number 9 personality group as an example and learn about their characteristics.

General Characteristics of People Born on 9, 18, and 27 July

From the top left section of the chart, we can see the 9-7 number vibration. The keywords I used to describe the number 9 is the Entrepreneur, while the number 7 represents the Celebrity.

The pairing suggests that people born on these dates are charismatic and can attract many customers or supporters in their careers or business.

Having good business acumen, they tend to achieve positive outcomes. However, they may tend to be slower in capitalising on opportunities, so they might want to seek improvements if necessary.

As we move on to look at the left outer section of the chart, the 5-7 number pattern suggests that they have the opportunity to meet new friends who may be in a higher-level playing field or associate themselves with senior management of government or non-government organisations.

They need to be mindful of the choice of words and actions to avoid getting involved in legal issues.

People with these birthdates belong to the Character Root Number 9 personality as their core.

In the completed chart above, we can observe that people with these numbers are friendly and approachable. They will have many friends, supporters, or fans who will help them and give advice.

They have an active lifestyle and loves helping people. Such acts of kindness naturally attract others to them where they feel comfortable with their personality.

They are also very good at connecting and communicating with people where they are eloquent and convincing. They are exceptionally charming and easily attract others to them, usually the opposite sex.

With the number 9 appearing at the bottommost section of the chart, they should enjoy a life of opportunities and success.

Another personality trait that we can observe from the chart is that they are very independent and do not like to depend on others. Internally within their minds, they might find themselves sometimes in a struggle or conflict within themselves and hampers decision-making.

There could be a spillover where externally, they may appear to be impatient and easily irritable. But putting that aside, people with this chart will also often display enthusiasm and showcase their talents.

The core difference in the above chart from those born before 2000 is on the right sections.

Compared to those born before 2000, this chart has a number 2. So you may find that they are more vocal in expressing their views.

And the number 2 is paired with the number 9. The keyword representing these numbers are the Communicator and the Entrepreneur. People with this number pattern enjoy a conversation that discusses opportunities of all kinds, such as business, investment, or properties.

They may also enjoy listening to or talking about success stories. It helps them to attract people to support them.

They are also the type of people who will think through carefully before they speak. Thus, if they have to commit to doing something, they will consider things properly before responding. This will therefore gain the trust of others as someone they can count on to deliver.

But because they may analyse a lot, it will take them quite some time to conclude before they act. So sometimes, they may be seen as relatively slow in taking action.

Nevertheless, they will do well and attain success. Overall, the character of people born on these birthdates is pretty awesome.

When you see the 2-7 number pattern in a person’s chart, you will find them to exude a certain charm and feels naturally attracted to them.

And when you see the 4-2 number combination, you can feel assured that when they commit to doing something for you, they will deliver.

Lastly, the 5-7 number vibration is something to be noted. As mentioned in the earlier sections, it has both pros and cons.

The numerology insights for the birthdates mentioned above are not a complete analysis as there are many more insights we can infer from the numbers. However, it should sufficiently give us a good understanding of the characteristics of people born on these dates.

If you would like to keep in touch to learn more about Numerology from me or be updated whenever I release new content, you can find out from either one or all of the channels below.