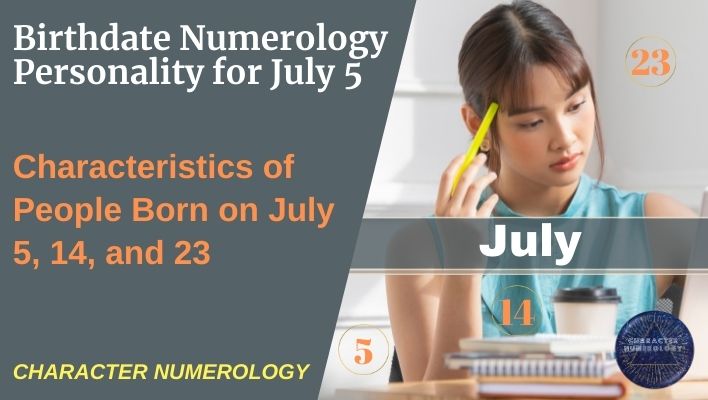 Do you have family members, friends, or colleagues born on July 5th, 14th, or 23rd? How well do you know them? In this Birthdate Numerology Personality for July 5 post, let’s discover the personalities of people born on these dates in a refreshingly different way using numbers.

In case you are new to numerology, you may wonder how these three dates mean the same.

Therefore, when we reduce 14 and 23 to its single digit, it will result in the number 5.

What you may find interesting is that people who are born on similar birth dates may likely display similar personality traits.

Do you sometimes find that two or more friends or people you know have similar personalities?

If you know their behavioural or communication style, you can then learn to appreciate them better for who they are or convey your message optimally.

You may think of ways to learn how best to approach them and avoid conflicts. You will see and feel people through a refreshingly different angle, with numbers!

And the table below shows the grouping of people born on the 5th, 14th, and 23rd July across different years by the character root numbers.

When you pair the three birthdays against each column of years above, the numbers in the numerology chart will be the same.

However, there will be some differences on the right side of the numerology chart for people born after the year 2000. The specific years compared with the above are in the years 2009, 2018, and 2027.

In the subsequent sections, we will go through the Character Root Number 5 personality group as an example and learn about their characteristics.

General Birthdate Numerology Personality of People Born on 5, 14, and 23 July

In the above section of the chart, we see the number patterns 5-7 as the inner character, and the outer character shows the 1-8 number combinations.

Let’s understand the inner character first, which shows the pairing of the numbers 5 and 7. We may summarise the positive characteristics of the number 5 by the words ambition, creativity, analytical, and leadership.

As we put together the personality traits of both the numbers 5 and 7, it suggests that people with this number pattern will have opportunities to attract wealth or power relationships.

There are chances of befriending people of status and wealth. And this is where they may associate themselves with senior management of government or commercial organisations.

Externally, people with the numbers 1-8 will usually portray a serious-looking personality to others. They may often find themselves in a busy and stressful state of mind as they tend to shoulder most of the burden in their area of responsibility.

And this is what makes them trustworthy and dependable. Therefore, people with this number may be entrusted with opportunities that can help them to excel and achieve success in their lives.

But as the number 8 has a heavy weighting on having a responsibility characteristic, they have to learn to relax and let go or delegate so that they do not accumulate too much stress and affect their health.

People with these birthdates belong to the Character Root Number 5 personality as their core.

With the completed chart shown above, let us look at the other numbers and interpret their meanings.

What we can observe on the right section of the chart shows that people born on this birthdate and the related ones are the kind who prefers to do things on their own and not depend on others.

They may invite gossips or easily lead to misunderstandings due to the lack of communication or use the wrong choice of words in their conversation.

On the surface, they may also express a lot of drive and enthusiasm in their work. However, it can be a double-edged sword.

On the one hand, the numbers suggest that they are talented. But on the other, they may be impatient and easily irritable. They may be indecisive where they have many choices.

They need to learn to curb their impatience and emotion to unlock doors of opportunities for them.

And in the middle of the chart is the 3-2-5 number pattern. The number 3 is primarily about taking action, while the number 2 is about communication.

Putting it together, you may observe that people with such numbers may speak their minds without adequate consideration of the consequences.

Take a pinch of salt on what they promise you, as they may either forget what they have said or may change their viewpoints the next time you bring up the same topic.

If we correlate this inner character with the outer personality, particularly on the 1-8 number pattern, we should be mindful of this mismatch of characters.

It is probably a good idea to write things down so that nobody forgets what was said and done to overcome the shortcomings in the inner character.

Nevertheless, they are potential motivational speakers who can rally a crowd and gain a following. However, their supporters may bring stress to them, though that would be a good sign.

Compared to those born before 2000, the above chart has a number 2. So you may find that these people are more vocal in expressing their views.

And the number 2 is paired with the number 9. The keyword representing these numbers are the Communicator and the Entrepreneur.

People with this number pattern enjoy a conversation that discusses opportunities of all kinds, such as business, investment, or properties.

They may also enjoy listening to or talking about success stories. It helps them to attract people to support them.

So given the 3-2-5 number pattern, which suggests that they are potential motivational speakers as mentioned in the earlier section, we may find that they are natural at using stories to encourage or inspire others.

They are also the type of people who will think through carefully before they speak. Thus, if they have to commit to doing something, they will consider things properly before responding.

Doing so will therefore gain the trust of others as someone they can count on to deliver.

But with the 3-2 number pattern as the core inner character, it is a mismatch with the outer personalities. The best way is to document down what has been promised to hold them accountable and achieve a win-win.

There are two special numbers that we can see from these two charts. These are the 4-2 and 5-7 number patterns.

When you see the 4-2 number combination, you can feel assured that they will commit to delivering what they promise to you.

However, in the case above, we also need to consider the effects of the inner character.

The 5-7 number vibration is something to be noted. People with this number combination in their charts need to be mindful of what they say or do as it may attract legal issues.

The numerology insights for the birthdates mentioned above are not a complete analysis as there are many more insights we can infer from the numbers.

If you would like to keep in touch to learn more about Numerology from me or be updated whenever I release new content, you can find out from either one or all of the channels below.