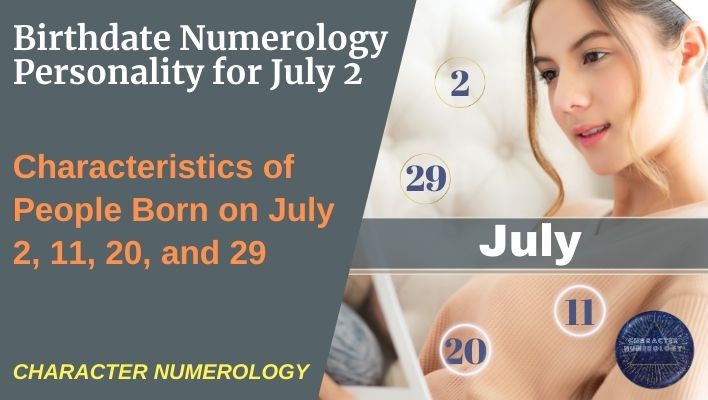 In this Birthdate Numerology Personality for July 2 post, let’s explore and understand the characteristics of people born on July 2nd, 11th, 20th, and 29th.

Or you may be someone already familiar with numerology who wishes to see things from a different perspective.

Whichever the case, I hope this post will provide some value to you.

Do you sometimes notice that two or more friends or people you know have similar personalities? Yet, they could be born years apart.

Coming back then, when we pair any of these four dates in July with different years’ groupings, we will observe that the numerology charts are the same.

And the table below shows the grouping of people born on the 2nd, 11th, 20th, and 29th July across different years by the character root numbers.

However, there will be some differences on the right side of the numerology chart for people born after the year 2000. The specific years compared with the above are in the years 2007, 2016, and 2025.

In the subsequent sections, we will go through the Character Root Number 9 personality group as an example and learn about their characteristics.

In the above chart, we see the number patterns 2-7 in the inner triangle, and the outer character shows the 7-2 number combinations.

People having these numbers in their chart are likely to be very eloquent or outspoken. They are friendly and approachable and will be well-liked by many people. And they are charismatic and should easily attract a following.

They should be mindful of their natural charm as they tend to attract the opposite sex easily.

The resulting number 9 from the 2-7 suggests that they will have many opportunities in life.

People with any of these birthdates will belong to the Character Root Number 9 (Entrepreneur) personality as their core.

The first thing that we will notice in this chart is that there are many number 9. The number 9 signifies opportunities with characteristics of the individuals such as intelligence, observance, honesty, and having an adventuring spirit.

On the negative spectrum, the number 9 may imply a lack of focus, greed, laziness, fear of failure, and loneliness.

People with many 9 in their numerology chart are likely to have a flair for coming up with many business ideas. And this will transmute into bountiful opportunities.

However, while they are ambitious and eager to capitalise on these opportunities, they may become greedy to seek fame and fortune quickly. They may end up stretching themselves out too thin and lose focus. In the end, their efforts may not yield good results.

Nevertheless, people born on these birthdates have the 1-8 number combinations in their charts.

The number 1 implies leadership, while the number 8 carries the element of responsibility.

These numbers, perhaps, help to reinforce their character with a solid footing of discipline, accountability, and responsibility from their youth.

But we should also note that environment and upbringing play a part too.

The chart is missing the numbers 3, 4, 5, and 6. And of these four numbers, perhaps the most helpful numbers to complement this chart would be the numbers 4 and 6.

The number 4 relates to planning and having an eye for detail, while the number 6 is associated with wisdom.

Augmenting the vibrational energies from either or both of these numbers may help to improve their success.

To the believers, gemstones are external objects that can help to improve the vibrational energies of the wearer. For enhancing a person’s vibrational energy of the number 4, we can consider using hematite as one possibility.

What is remarkable in this chart is that, other than the multiple number 9, you will also find that it is almost like a mirror image. It suggests that the personality of people with these birthdates may be of two extremes.

There are three sets of 2-7 in this chart which seems particularly excessive. People with this chart may need to manage their relationship carefully while benefiting from its positive aspect.

Other than the above, the chart is missing the numbers 1, 3, 4, 5, 6, and 8. Preferably, augmenting the vibrational energies from the numbers 1, 4, and 6 would be most suitable for this chart.

The 2-7 number pattern is prominent in both charts, and the meaning has been explained above.

With the number 9 appearing in the left outer, right outer, Character Root Number, and below the root, it is an indication that people born on these birthdates may have the opportunity to receive a sizeable inheritance at some point in their lives.