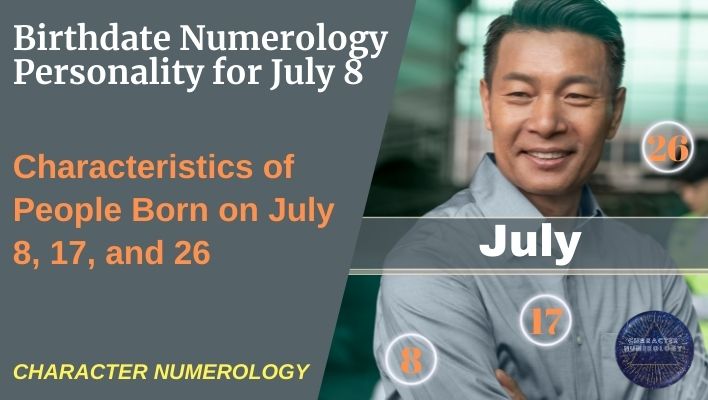 In this Birthdate Numerology Personality for July 8 post, let’s discover the personalities of people born on the 8th, 17th, and 26th of July using numbers.

Do you sometimes find it hard to understand someone you know, why do they respond or not respond to you in a certain way? Would it be great if you have the skills to read a person like a book?

Or perhaps, having a method to learn more about yourself is what you need?

If you are new to numerology, you may wonder how these three dates mean the same.

Therefore, when we reduce 17 and 26 to its single digit, it will result in the number 8.

Do you sometimes find that two or more friends or people you know have similar personalities? Yet, they could be years apart.

And the table below shows the grouping of people born on the 8th, 17th, and 26th July across different years by the character root numbers.

However, there will be some differences on the right side of the numerology chart for people born after the year 2000. The specific years compared with the above are in the years 2003, 2012, and 2021. And it will stretch all the way to the year 2093.

In the subsequent sections, we will go through the Character Root Number 2 personality group as an example and learn about their characteristics.

In the above chart, we see the number patterns 8-7 in the inner triangle, and the outer character shows the 4-5 number combinations.

People born on these dates have hardworking and responsible characteristics. Their efforts will be recognised and appreciated by others.

They may be suitable for negotiation or communication-related work. But sometimes, they may be feeling reserved and prefer to step away from the limelight.

They tend to receive help from people around them where needed, so they have no shortage of support.

Determined and with an excellent analytical mind, the plans that they come up with will lead them to success. In times of distress or in difficult situations, they will always have a way to work things out.

People with these birthdates belong to the Character Root Number 2 (Communicator) personality as their core.

With the completed chart above, the core character is the 6-5-2 combination with a Character Root Number 2. The number vibration of this combination suggests a characteristic of prudence.

People with these numbers are detailed and meticulous and believe in spending their resources wisely. They will do fairly well in managing their finances or investments but are overly cautious.

They are the type who will not give things up easily and will persevere to achieve their goals.

Life may be a roller coaster for them as they step out to take risks, be it their career, business or investments. But eventually, they should enjoy the fruits of their labour.

Along the way, they will have people supporting or guiding them, putting some pressure on themselves to help them to improve.

From the numbers, we can observe that they are likely the type who goes straight to the point. Occasionally, they might rub people the wrong way.

People born on these birthdates will have many benefactors to mentor or coach them. They should have an open mind and welcome the guidance provided to them.

Overall, this chart is missing the number 1. It is perhaps an indication that people with this chart will often need someone to lead them in their lives, so the benefactors that come to their lives may help to fill in this gap.

Be receptive to people’s advice.

This chart actually has the 2-7 number pattern. When you see this combination in a person’s chart, you will find them to exude a certain charm and feels naturally attracted to them.