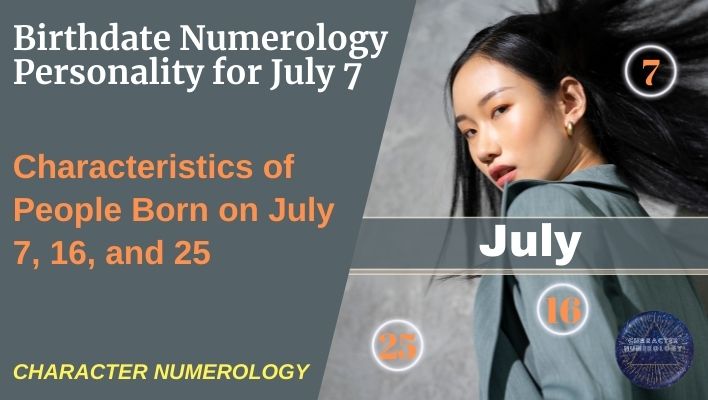 Do you have family members, friends, or colleagues born on July 7th, 16th, or 25th? How well do you know them? In this Birthdate Numerology Personality for July 7 post, let’s discover the personalities of people born on these dates in a refreshingly different way using numbers.

If you are new to numerology, you may wonder how these three dates mean the same.

Therefore, when we reduce 16 and 25 to its single digit, it will result in the number 7.

Do you sometimes find that two or more friends or people you know have similar personalities? Yet, they could be years apart.

And the table below shows the grouping of people born on the 7th, 16th, and 25th July across different years by the character root numbers.

However, there will be some differences on the right side of the numerology chart for people born after the year 2000. The specific years compared with the above are in the years 2003, 2012, and 2021.

In the subsequent sections, we will go through the Character Root Number 1 personality group as an example and learn about their characteristics.

People who have the 7-7 numbers in their charts are born lucky. They will have friends or associates who will provide support and help them to tide through difficult times.

They have good leadership skills but may skew towards a dictatorship style. And it could probably be because they are so used to getting what they want. They know how best to utilise the support that they get to pursue their goals or ambition.

The chart also suggests that they appear very energetic and likely to be the type who approach things enthusiastically. But patience is not a virtue they are likely to have. They will want things done quickly and maybe temperamental relatively easily.

People with these birthdates belong to the Character Root Number 1 (Leader) personality as their core.

Completing the chart with the birthdate 25th July 1976, the core character of people born on this date is the 5-5-1 number pattern. The vibrational energies of this pattern have friction arising from the double 5.

The number 5 holds the characteristics of being ambitious, creative, and meticulous. It helps to augment leadership skills and sets clear objectives.

On the negative end, the number 5 suggests obstacles to one’s growth. It includes characteristics such as being self-centered, obstinate, indecisive, temperamental, and lack of trust.

We may interpret the Character Root Number 1, derived from the double number 5, as a leader with two minds. There are lots of things or ambitions that people with this number will want to achieve. But their direction may keep changing.

They can be fickle-minded where their focus changes now and then. This characteristic can be quite self-destructive and impedes their progress.

People with this chart will likely go through lots of ups and downs, as suggested by the 6-9 number pattern on the right outer section of the chart.

But if they do not work on the negative effects of their 5-5-1, the efforts they put in may go to waste in the end.

And it is also beneficial to note that this chart is missing the number 2. So people born on these dates may not be the best communicators.

Compared to those born before 2000, the above chart has a number 2. So you may find that these people are more vocal in expressing their views. And they are likely the type who goes straight to the point.

They might also have a fiery temper and rub people the wrong way.

Along the way, they should have benefactors to guide or support them. People born on these birthdates do not have the number 4, which suggests they are not as detailed in planning or organising things properly.

They should partner with others who have the number 4 in their numerology chart to supplement this gap.

Or they may find other ways to improve on their thought process.

Using external objects such as hematite gemstones may help to augment the vibrational energies related to the number 4.

IIt helps the wearer to ground the mind, enabling them to concentrate and focus. It will thereby enhance their logical thinking and planning abilities.