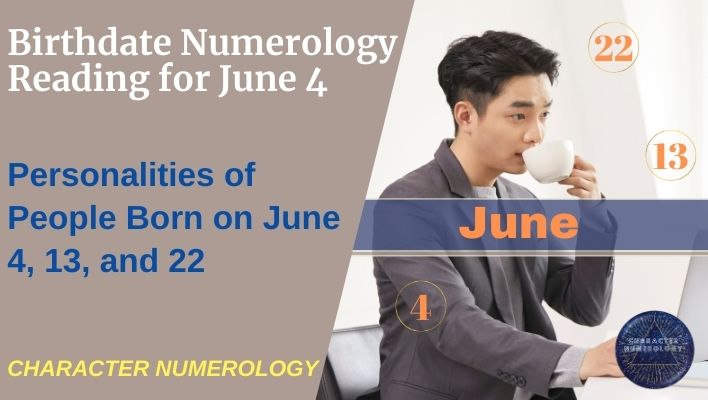 The Birthdate Numerology Reading for June 4 will include people born on the 4th, 13th, and 22nd of the month. It is because when we reduce 13 and 22 to its single digit, it will result in the number 4.

If you are new to numerology, you may feel lost with the statement above, but the next section will explain what I mean.

And the table below shows the grouping of people born on the 4th, 13th, and 22nd June across different years by the character root numbers.

What the above table means is that if you correspond the respective columns of years based on the 3 birthdays, people who are born on a similar grouping of years and days in June will likely behave the same.

And they are thus group according to the Character Root Numbers.

The numbers in this section of the chart tell us that people with these numbers are good at analysis and can make excellent judgments from their detailed work.

The insights they can draw from their analysis will serve them well in achieving wealth or greater wisdom.

They will tend to have to work alone, perhaps because they have to do a lot of thinking and researching. They are calm and composed, and that is also how they would like to handle things.

Such a cool-headed personality can be rather attractive. And this persona can provide them with the opportunities to meet people from different walks of life and status.

They may build and leverage their relationships to realise mutually beneficial goals.

The numbers also suggest that they can be fiercely loyal to their friends. They may need to be cautious about who they trust or trust what their friends say to avoid being deceived or framed.

People with these birthdates belong to the Character Root Number 2 personality.

Looking at the above chart suggests a person with a strong sense of independence. They prefer to do things on their own, having a creative and strategic thinking mindset. Having the ability to come up with unique and unconventional solutions or ideas will enable them to achieve success in their business or career.

However, as they do not like to depend on others, it may result in a lack of communication which can easily lead to misunderstanding, invite gossips, or bad-mouthing.

They should attempt to be less authoritative in how they speak, which is another characteristic seen from the numbers. Improving their communication style will be beneficial.

Another observation from the numbers is that they may appear very enthusiastic when they do things, but at the same time, they can be very emotional and impatient.

Curbing the negative side and embracing the positive will surely help them in the long run.

There are a few more insights that we can read from this chart, but I think we have sufficiently covered the main points.

Personality-wise, they are good at expressing themselves and is a good conversationalist.

They are patient with people and ensures their message gets across where they do not mind repeating themselves over and over again. This suggests that they are either good in selling or will do well as an educator.

The numbers also show that they have the energy and drive to help them to discover many opportunities in life. But controlling their emotions and staying focus is necessary to ensure that their efforts will be fruitful and rewarding.

When we see the numbers on the left and the right side of the chart together, it seems to be a well-balanced chart. The left side possesses the analytical mindset, while the right side holds the communicative attitude.

The 7-5 number pattern on the left outer section of the chart is a special number that indicates a person who can be very loyal to their friends. However, they may tend to be deceived at some point, and therefore, they should try not to be guarantors where possible.

And I would also like to mention briefly that Character Numerology is ranked as one of the Top 25 Numerology Blog on the internet by Feedspot.