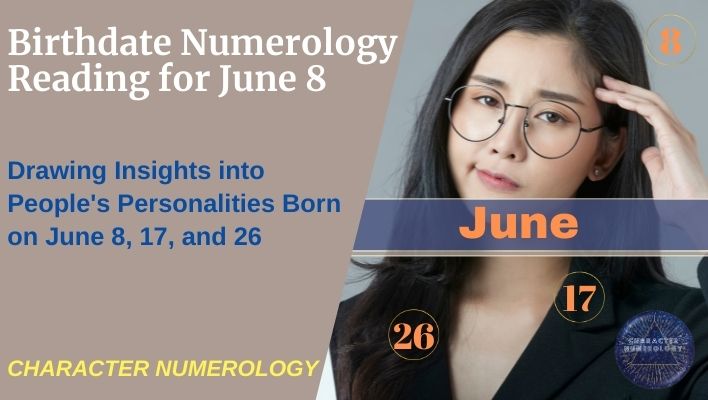 The Birthdate Numerology Reading for June 8 will include people born on the 8th, 17th, and 26th of the month. It is because when we reduce 17 and 26 to its single digit, it will result in the number 8.

What are the characteristics of people who are born on the 8th of June? It is always helpful to know the personalities of those you are working with or spending time together. If you understand their behavioural or communication style, you can then learn to convey your message optimally.

Through numerology, we can get an insight into people’s characteristics by studying their Numerology charts. And people who are born on similar birth dates will likely display similar characteristics or behaviours.

If you are new to numerology, this may be hard to understand, but the subsequent sections will explain further what I mean.

And the table below shows the grouping of people born on the 8th, 17th, and 26th June across different years by the character root numbers.

The numbers in the numerology chart will be the same when you pair the 3 birthdays against each column of years above.

Therefore, people born on a similar grouping of years and days in June will likely behave the same. And they are thus group according to the 9 Character Root Numbers.

However, there will be some differences on the right side of the numerology chart for people born after the year 2000. The specific years that are comparable with the above are in the years 2007, 2016, and 2025.

People with these numbers in their chart suggest that they may have to go through quite a fair bit of hardships and challenges before achieving success.

Nevertheless, they are imaginative and creative but must be brave to showcase their talents before they have the opportunities and be recognised.

They have a lot of money-making ideas, and they may need to travel around to gain inspiration.

They are good at planning, organising, and presentation. In people-to-people interaction, others will generally perceive them as trustworthy to deliver on the things they promise to do. They will only commit to a task that they are confident to complete and not overpromise.

And this is where you may find it harder to get them to agree to do something. However, once they commit themselves to deliver, you can trust them to do their job.

Thus, you can draw insights into a person’s characteristics when you know how to interpret the meaning of the numbers in a numerology chart.

Some characteristics cannot be easily observed unless you know the person for quite some time. With numerology, you have a probabilistic view in advance.

People with these birthdates belong to the Character Root Number 5 personality.

Looking at the completed chart above shows that they are ambitious, creative, and meticulous. They have a strong desire to achieve their goals and have big dreams.

On the positive side, they may capitalise on the opportunities presented to them when they see one and could include the possibility to expand their career or business both domestically or internationally.

However, the presence of the 5-9-5 number combination suggests a conflict of thoughts. Opportunities which is represented by the number 9 are sandwich between the two number 5. It is an indication that they will often struggle between 2 views and thus set an obstacle on themselves.

They also have to remind themselves to avoid illegal activities and remain focused on doing the right things. One of the opposing views above may be an easy way out but inappropriate, for instance.

A Character Root Number 5 personality should try to be more receptive to people’s opinions. However, this can be hard to achieve because they are the type who firmly believe in themselves. If we think negatively, we may say they are stubborn and self-centered.

But the number 5 needs the space to explore and go on an adventure to find things out for themselves. That’s just the way they are, the way they learn.

Such personality traits resonate well with what we have discussed on the general characteristics. You will hence find it harder to get them to say yes.

Another observation we can make from this chart is that we may often find them feeling busy and stressed. And that is because they have the inherent energies of being responsible and tend to shoulder most of the burden.

A solemn and serious-looking personality is what we might usually see of people with this chart. They should make a conscious effort to learn to relax and delegate.

Improving their communication skills will help them feel that they are not shouldering all the burdens by themselves.

People born in 2007, 2016, 2025, and every nine years till 2097 are generally well-liked by others. They are charismatic and will easily attract others to them, usually the opposite gender.

And this characteristic is observed by the 2-7-9 number sequence, which appears on the inner and outer character. Nevertheless, as this personality trait appears on the year side, it may not be particularly apparent sometimes.

The special numbers that we can pay attention to are the 2-4 and 2-7 number patterns.

When we see the 2-4 number combination in a person’s chart, we can feel more at ease to trust what they promise to do.

And when we see the 2-7 number sequence, you will find that such people are generally charismatic, comfortable, or fun to hang around with.