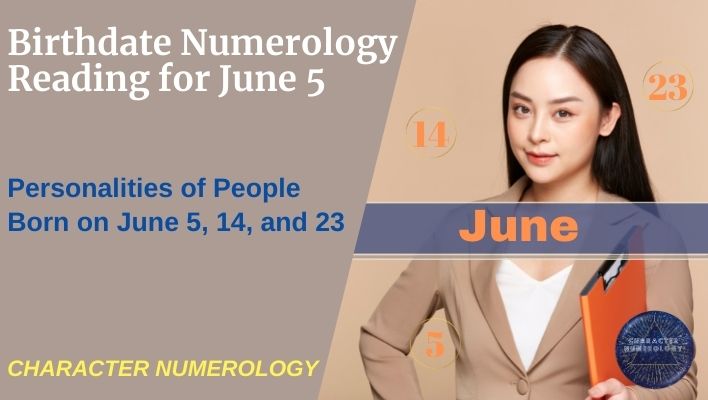 The Birthdate Numerology Reading for June 5 will include people born on the 5th, 14th, and 23rd of the month. It is because when we reduce 14 and 23 to its single digit, it will result in the number 5.

What are the characteristics of people who are born on the 5th of June? It is always helpful to know the personalities of those you are working with or spending time together. If you understand their behavioural or communication style, you can then learn to convey your message optimally.

Through numerology, we can get an insight into people’s characteristics by studying their Numerology charts. And people who are born on similar birth dates will likely display similar characteristics or behaviours.

If you are new to numerology, this may be hard to understand, but the subsequent sections will explain further what I mean.

And the table below shows the grouping of people born on the 5th, 14th, and 23rd June across different years by the character root numbers.

The numbers in the numerology chart will be the same when you pair the 3 birthdays against each column of years above.

Therefore, people born on a similar grouping of years and days in June will likely behave the same. And they are thus group according to the 9 Character Root Numbers.

However, there will be some differences on the right side of the numerology chart for people born after the year 2000. The specific years that are comparable with the above are in the years 2008, 2017, and 2026.

People with these numbers in their chart suggest that they are meticulous and are vigilant with how they spend their money. And it can be to the point that others may see them as a miser.

As they have a cautious personality type, they tend to be mindful of their words and only express their opinions with people they trust.

And because they are cautious, it also means that they are very hardworking people in nature. Their efforts will be recognised and appreciated.

They may be suitable for negotiation or communication-related work. Sometimes, they may be feeling reserved and prefer to step away from the limelight.

People around them will lend them their support. But as they are responsible and hardworking, they may tend to bring stress to their supporters.

Thus, you can draw insights into a person’s characteristics when you know how to interpret the meaning of the numbers in a numerology chart.

Some characteristics cannot be easily observed unless you know the person for quite some time. With numerology, you have a probabilistic view in advance.

People with these birthdates belong to the Character Root Number 3 personality.

From the completed chart above, we can observe that the core vibrational energy is number 3. The Character Root Number 3 personality types are people full of energy. They are action takers, optimistic, expressive, and talented. But on the negative side, they are also temperamental, impatient, and rash.

Looking at the rest of the numbers in the chart, we can see that people born on this birthdate need to be lone rangers to achieve success in life. It is altogether possible that they have a preference to work alone to exercise their creativity.

They are courageous, determined, have a strategic mindset, and believe in themselves. These personality traits will help them to come up with unique and unconventional solutions. The plans that they come up with will lead them to success.

But such characteristics will also suggest that when they communicate, there is a high chance that they will do so in an authoritative manner. They have a strong desire to be in control to push things forward quickly.

They need to be mindful of their choice of words versus their position in a given situation to avoid misunderstanding with others unnecessarily.

People born in 2008, 2017, 2026, and every nine years till 2098 are good at expressing themselves and are good conversationalists. They are responsible and patient with people to ensure their message gets across.

The willingness to repeat themselves also suggests they are suitable for sales or marketing.

They have the enthusiasm and drive which will help them to find many opportunities in life. However, they should be mindful not to overstretch themselves too much as the numbers in the chart suggest that they may lose the opportunities just as quickly, or the effort they put in may not yield good results.

To harness the positive energies of the numbers, they should focus on just a few ventures at a time.