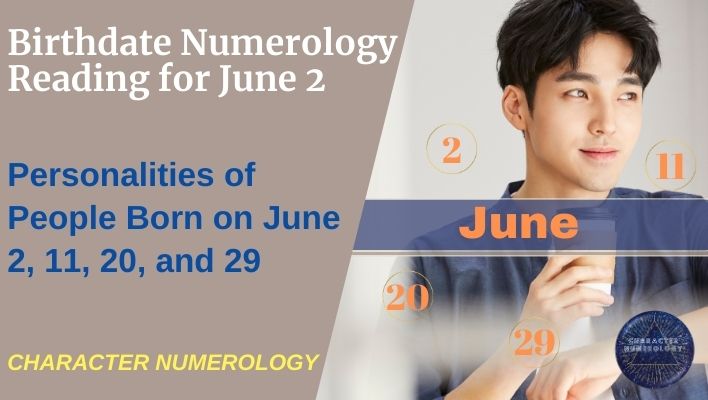 When we pair any of these 4 dates in June with different years, we will observe distinct characteristics from other groupings. And on a broad category, we can classify them into the 9 Character Root Numbers.

If you are new to numerology, you may feel lost with the statement above, but the next section will explain what I mean.

And the table below shows the grouping of people born on the 2nd, 11th, 20thand 29th June across different years by the character root numbers.

What the above table means is that if you correspond the respective columns of years based on the 4 birthdays, people who are born on a similar grouping of years and days in June will likely behave the same.

And they are thus group according to the Character Root Numbers.

People who are born in 1988 and 1997 with the same day and month will have the same numerology chart.

We will start by understanding the general characteristics of people born on the 2nd, 11th, 20th, and 29th June, as it will be the same for all character root numbers.

For those born on these dates, the numbers in the top left of the chart suggest that they tend to do well in sales or marketing-related activities. They are more open-minded when it comes to discussing financial matters.

The left outer section of the chart shows that they are firm believers in themselves. With the right mindset, their determination can help them to achieve success.

On the negative side, there is a possibility that they tend to take care of their interest first. They could also appear to be indecisive sometimes.

People with these birthdates belong to the Character Root Number 7 personality.

As shown above, the full numerology chart is complete when we add the year on the right. Reducing the birth date will give rise to the Character Root Number 7 (Celebrity). And this is shown at the tip of the inverted triangle.

This number 7 is derived by the double 8 where 8 + 8 = 16 = 1 + 6 = 7. The positive characteristic of the number 7 personality is that they are approachable, lucky, having a sense of gratitude, good in analysis, sense of justice, and ingenious.

As such, people who are Character Root Number 7 personality type will generally attract others to them. They are popular, fun, or comfortable people to hang around together.

On the top right of the chart, they have the 1-7 number combination, represented as the Leader and the Celebrity. This combination leads to the number 8, referred to as the Guardian.

What this energy combination suggests is that they have the ability to lead but may feel stressed to do so.

The potential that we can see from the numbers is that if they are willing to take charge, they will have a high chance of success.

This possibility can be observed by the 9-6 number pattern on the right outer section, represented as the Entrepreneur and the Sage. Translating this to simple terms means opportunities and wealth.

But naturally, achieving success has a price tag. Life will not always be smooth sailing. Like a stock market or a roller coaster, there will be many ups and downs.

The question for this group of people is whether they are willing to step up, for this will not be an easy road. But the bigger question is whether they know about their potential to activate this side of their inherited vibrational energy?

To touch on the negative side of things, people with this chart need to be mindful of their relationship with their other half. The 8-8-7 number combination suggests a trend towards marriage issues. There is a higher probability, though this may not always happen. You can refer to my earlier post, Special Numbers in Numerology – Divorce Pattern, to have a better understanding.

One other thing to note from this chart is the absence of the number 4 (Mastermind). In a broad sense, it implies weaknesses in the areas of planning and analysis or an eye for detail.

To augment the energies of the number 4, people with this chart may consider acquiring objects that have such vibrational energies. Hematite gemstone is one such object, and you can read my earlier post, Hematite Healing Properties, to find out more.

There are a few more insights that we can read from this chart, but I think we have sufficiently covered the main points.

You may also have heard before that people born after 2000 are more vocal and expressive. In numerology, the presence of the number 2 explains this, which represents communication.

The above chart is also interesting where it is a mirror image looking from the left to the right or vice versa. We can refer back to the general characteristics that we have mentioned earlier to interpret the right side of the chart.

Like a mirror, the numbers suggest that life may swing either way on the extreme, for better or worse.

We should also note that the chart is missing the number 4. Hence, the vibrational energies or characteristics relating to analytical abilities and planning may not be too visible.

Another missing number is the number 9, which has positive characteristics relating to having good observation, intelligence, adventurous spirit, and honesty. The intuition to recognise opportunities may also trend on the low side, therefore.

From the above, we can see that the 9-6 and 8-8-7 number vibrations are special number combinations. These are numbers that can help to identify life events or for us to recognise the potential.